10 Days To The Halving As Bitcoin Decouples And Recovers From March 12 Crash: The Crypto Weekly Market Update

Bitcoin’s halving is right around the corner. It will slash the block reward miners get from minting new bitcoins in half and potentially reduce the supply of the cryptocurrency on the market. Historically, this has been a major bullish catalyst for Bitcoin as its price has so far increased substantially after the two previous halvings.

The last couple of days have been nothing but impressive for the leading cryptocurrency as it managed to touch $9,500 before retracing to where it currently trades at around $8,800. The entire market followed but what’s perhaps is more important is that Bitcoin managed to detach itself from equity markets and gold.

As the S&P 500 has still to recover from its crash in mid-March, Bitcoin has already regained its previous grounds and looks for fresh gains. Stocks, on the other hand, continue to feel the pressure of the coronavirus-induced financial markets as they struggle to chart gains. In 2020, Bitcoin managed to outperform both the S&P 500 and gold.

Meanwhile, important industry-wide developments continue to take place. Northwell Health joined IBM’s new blockchain solution in the battle against COVID-19. In China, reports had it that a new report can substantially lower electricity costs in the region of Sichuan as the country continues to adopt blockchain technology.

All in all, it has been a very promising week for the crypto market and with an estimated 10 days to Bitcoin’s halving, it’s interesting to see what will follow. 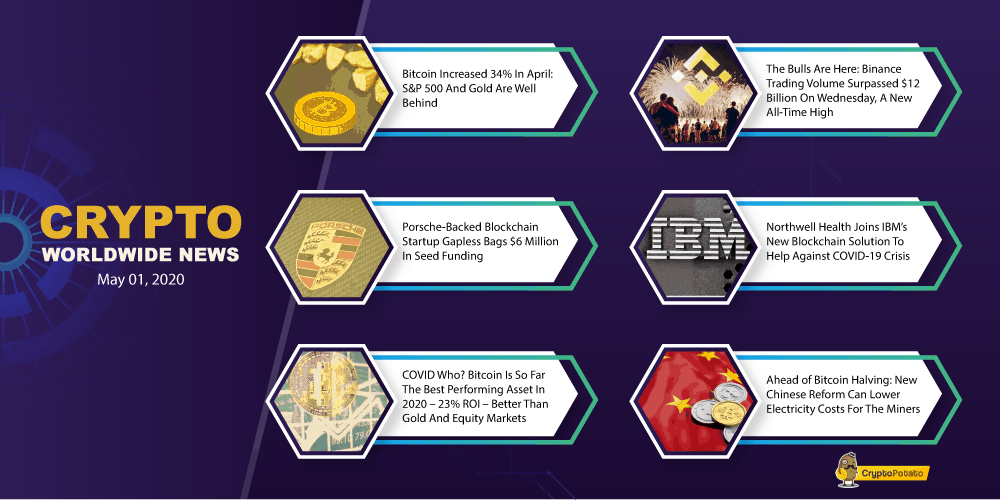 Bitcoin Increased 34% In April: S&P 500 And Gold Are Well Behind. Bitcoin had a great month in April as its price increased by roughly 34%. As such, the cryptocurrency managed to outperform global equity markets, as well as gold. With this, it also recovered from the mid-March selloff that brought its price below $4,000.

Porsche-Backed Blockchain Startup Gapless Bags $6 Million In Seed Funding. Gapless, a blockchain-based startup from Germany managed to raise 5.5 million euros in funding. Interestingly enough, among the investors in the round was also Porsche AG – a German manufacturing giant.

COVID Who? Bitcoin Is So Far The Best Performing Asset In 2020 – 23% ROI – Better Than Gold And Equity Markets. While it had its ups and downs, Bitcoin continues to be the best performing asset in 2020. Up 23% since the beginning of the year, it bettered both the S&P 500 and gold. All this happens just a few days before the halving.

The Bulls Are Here: Binance Trading Volume Surpassed $12 Billion On Wednesday, A New All-Time High. The world’s leading cryptocurrency exchange saw an all-time high in its daily trading volume on Wednesday. More than $12 billion exchanged hands in less than 24 hours beating the previous record of $11 billion.

Northwell Health Joins IBM’s New Blockchain Solution To Help Against COVID-19 Crisis. As the coronavirus continues to take its toll on the whole world, IBM’s new blockchain solution to help the battle against it sees continuous adoption. Among the latest prominent members to join is Northwell Health – New York’s largest healthcare provider.

Ahead of Bitcoin Halving: New Chinese Reform Can Lower Electricity Costs For The Miners. A city in China’s Sichuan region recently published a reform on the construction of hydropower consumption that could bring down the electricity costs substantially. As China is the most influential player in the field of Bitcoin mining, this might reduce the costs.

This week we have a chart analysis of Bitcoin, Ethereum, Ripple, Stellar, and Chainlink – click here for the full price analysis.


The post 10 Days To The Halving As Bitcoin Decouples And Recovers From March 12 Crash: The Crypto Weekly Market Update appeared first on CryptoPotato.