It’s safe to say that the last seven days were packed with action on all fronts. Bitcoin started the week trading at around $7,100 but fell to a low of around $6,800. The bears were for not, however, as yesterday BTC surged to a high of $7,780 in a few consecutive green candles.

Naturally, the entire market followed with most of the large-cap cryptocurrencies charting serious weekly increases. Tezos is up more than 25% over the past four days while others like Ethereum, Chainlink, and Stellar follow suit. With this, the cryptocurrency market managed to recover almost entirely from the vicious crash on March 12th.

On another note, oil experienced its worst crash in history. The WTI crude oil future contract which expires in May traded in the negative for the first time ever. The June contract also crashed substantially, sending many into disbelief.

Meanwhile, developments in the cryptocurrency field continue as China looks almost ready with its digital currencies. Reports have it that the country is already piloting the project with major companies such as McDonald’s and Starbucks trialing it at the forefront.

The COVID-19 crisis continues and many countries are still in full or partial lockdowns. Even though many governments begin talking about loosening the measures, the virus doesn’t appear to be slowing its spread as the total number of infected people grows to over 2.5 million worldwide. 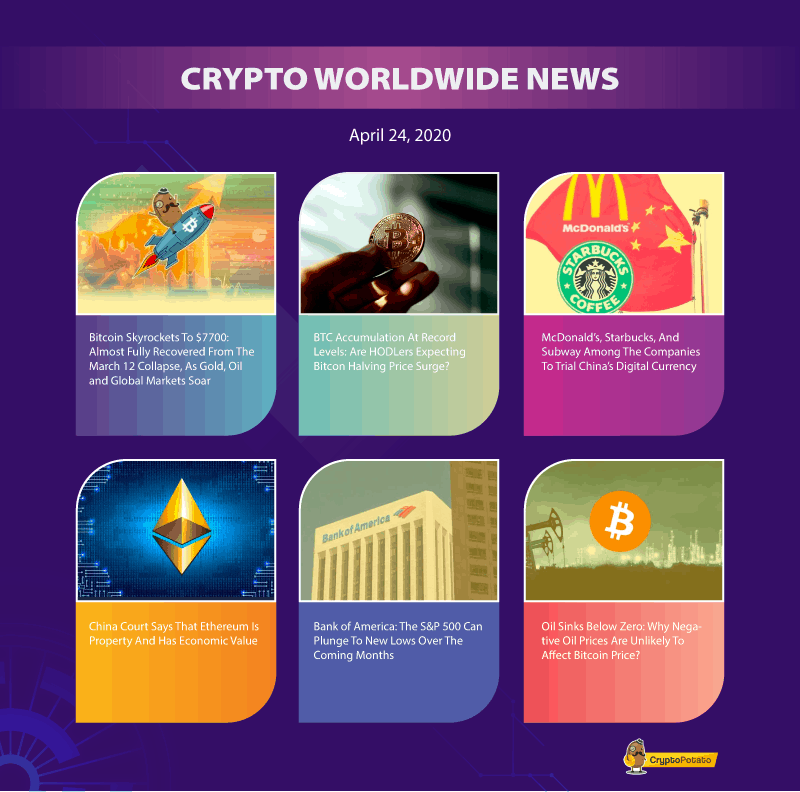 Bitcoin Skyrockets To $7700: Almost Fully Recovered From The March 12 Collapse, As Gold, Oil and Global Markets Soar. Yesterday Bitcoin made a remarkable move surging up to $7,780 in a few green candles. At the same time, legacy markets were also charting notable increases despite the ongoing coronavirus crisis.

BTC Accumulation At Record Levels: Are HODLers Expecting Bitcoin Halving Price Surge? According to recent reports, Bitcoin accumulation is on the rise in the past few weeks. BTC holders are also stashing more of it in anticipation of the upcoming halving. It’s also worth noting that Bitcoin is almost entirely recovered from the crash on May 12th.

McDonald’s, Starbucks, And Subway Among The Companies To Trial China’s Digital Currency. China is inching closer to launching its digital currency and it’s reportedly testing it in Xiongan New Area in North China’s Hebei Province. It’s also worth noting that McDonald’s, Subway, and Starbucks are among the companies to trial the digital currency.

China Court Says That Ethereum Is Property And Has Economic Value. In a recent court ruling, a Chinese judge has determined that Ethereum is property and that it bears economic value. This is a valuable step forward as the legislation in the country is typically against cryptocurrencies and their adoption.

Bank of America: The S&P 500 Can Plunge To New Lows Over The Coming Months. According to the Bank of America, the S&P 500 is not done plunging yet. According to a report, if the index continues to follow the current volatility pattern, it will increase slightly before decreasing down to new lows in the next few months.

Oil Sinks Below Zero: Why Negative Oil Prices Are Unlikely To Affect Bitcoin Price? As coronavirus continues to cause serious turmoils in many industries, the demand for oil has decreased severely. As such, the WTI crude oil futures for May traded in the negative for the first time in history. The June contract also decreased substantially.

This week we have a chart analysis of Bitcoin, Ethereum, Ripple, Tezos, and Cardano- click here for the full price analysis.