Bitcoin has dropped by a small 5% over the past week as it hovers around the $8,400 level. It found strong resistance at the $8,963 level (bearish .786 Fib Retracement) and was unable to overcome it. The latest retracement was expected, considering that Bitcoin managed to surge by over 30% in January to reach a high of around $9,150. It found support at the 200-days EMA at around $8,200 in today’s trading session, which allowed it to bounce back above $8,400. Unfortunately, the RSI has broken beneath the 50 level, and if it falls further, the selling momentum might send Bitcoin back beneath $8,000. 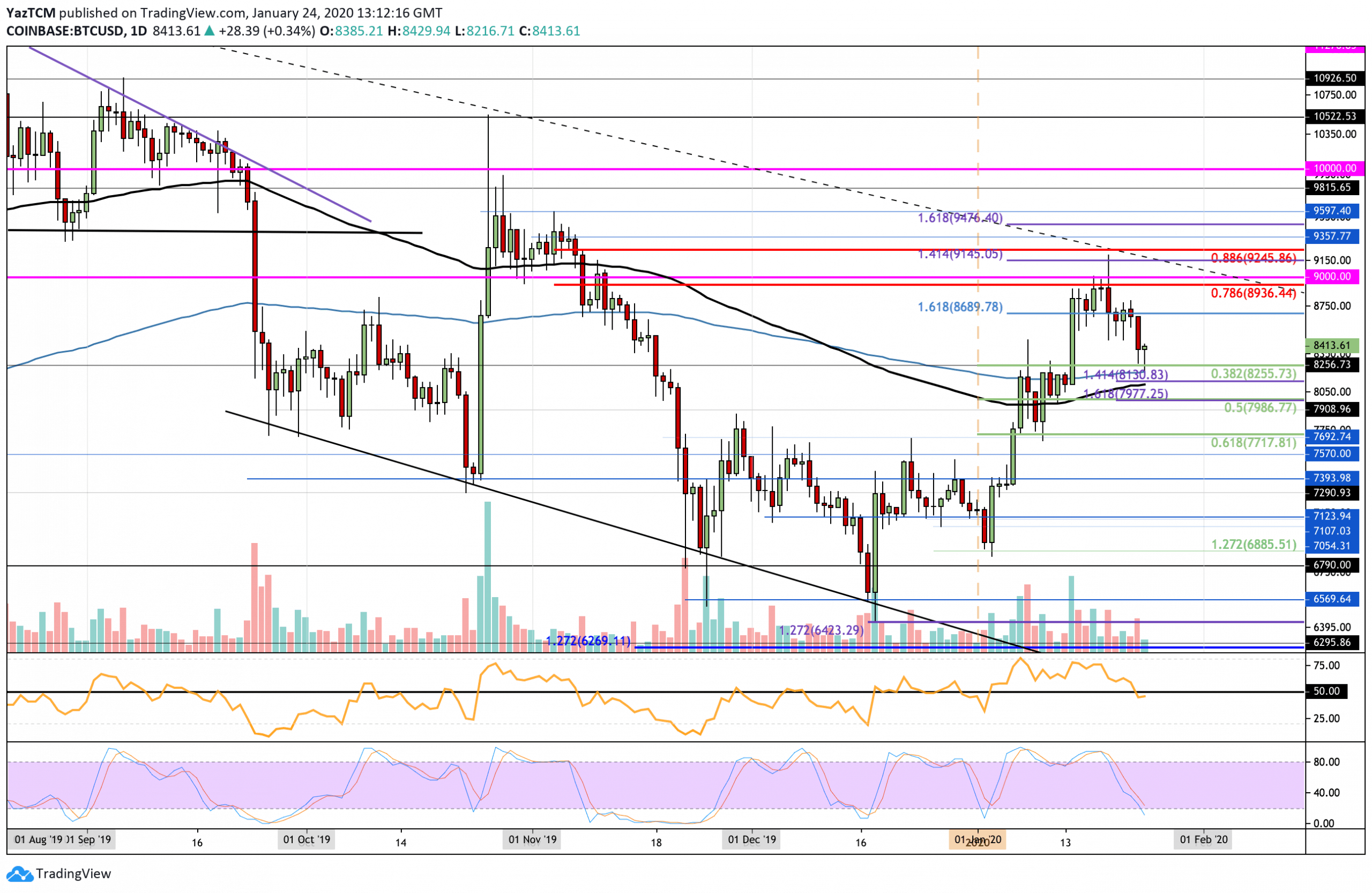 Ethereum also dropped by a total of 5% this week, which has seen it fall into support at the 100-days EMA at around $158. The cryptocurrency struggled with the resistance at about $174 (provided by the 200-days EMA) and rolled over to fall. The bulls are battling to remain above $158. However, if the RSI drops beneath 50, then the market is most likely going to head beneath this. 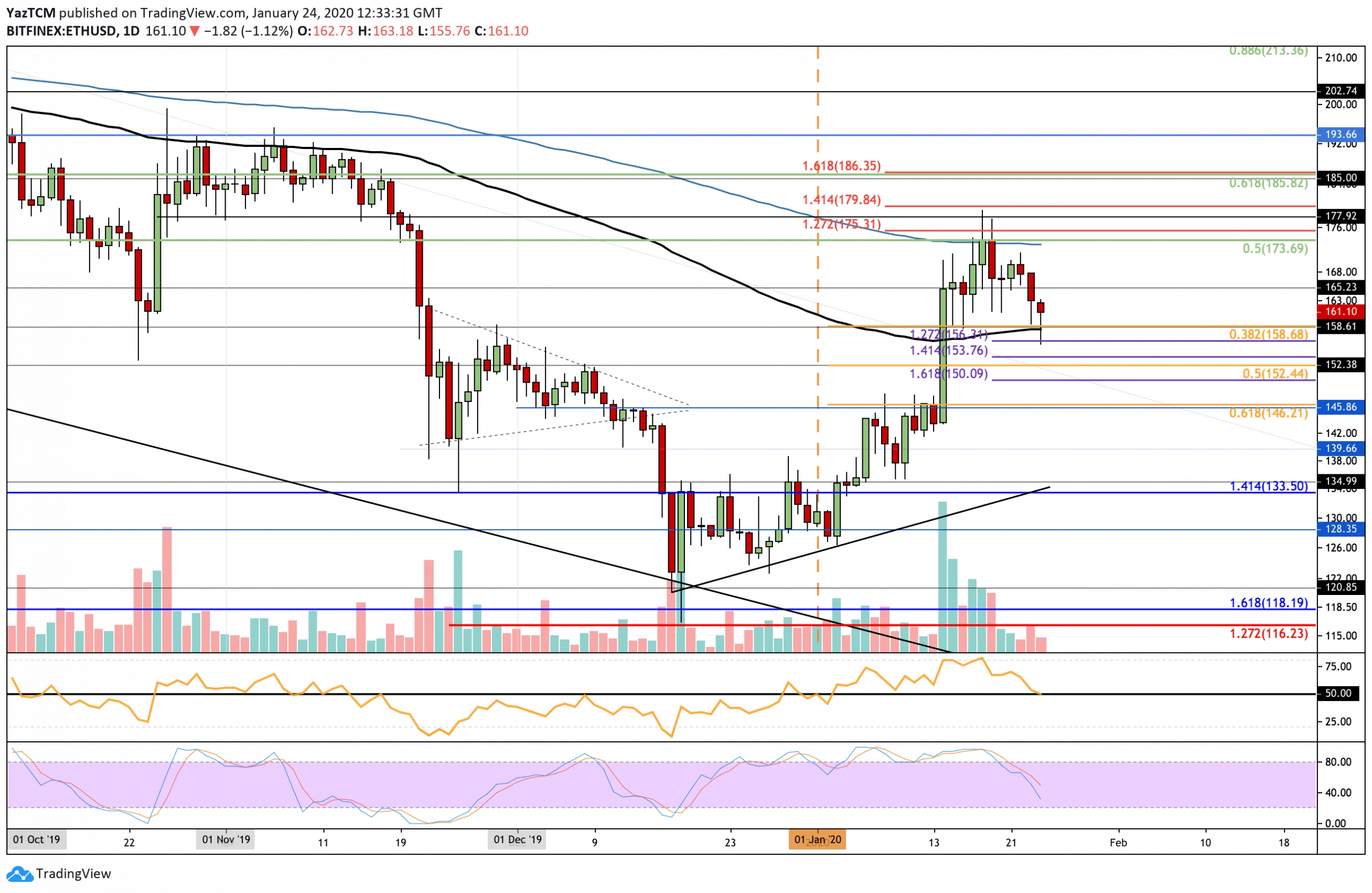 Against Bitcoin, ETH failed to overcome the resistance at the 100-days EMA and rolled over in today’s trading session. It found support at the short term .382 Fibonacci Retracement level at 0.0188 BTC and has bounced back above 0.019 BTC. However, it seems that the sellers may be in charge here, and we might see ETH/BTC heading back toward 0.0185 BTC if the RSI breaks beneath the 50 level. 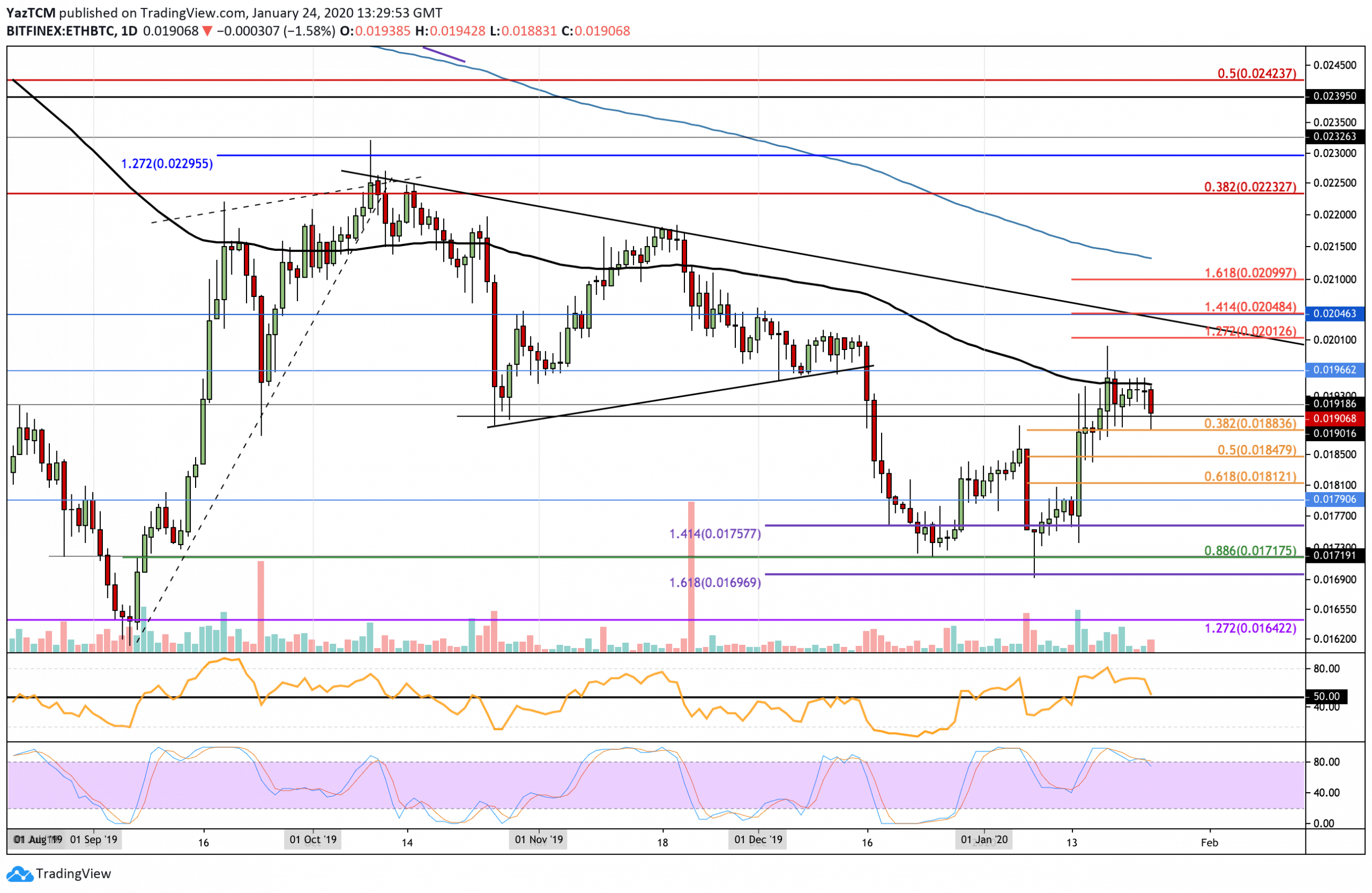 XRP is another cryptocurrency that dropped by a total of 5% this week, bringing the price for the coin down to $0.22. The market has found support here. However, the RSI has dropped beneath the 50 level to indicate the selling pressure is growing. XRP did climb above $0.25 but was unable to make any movement above this, causing it to roll over and fall. 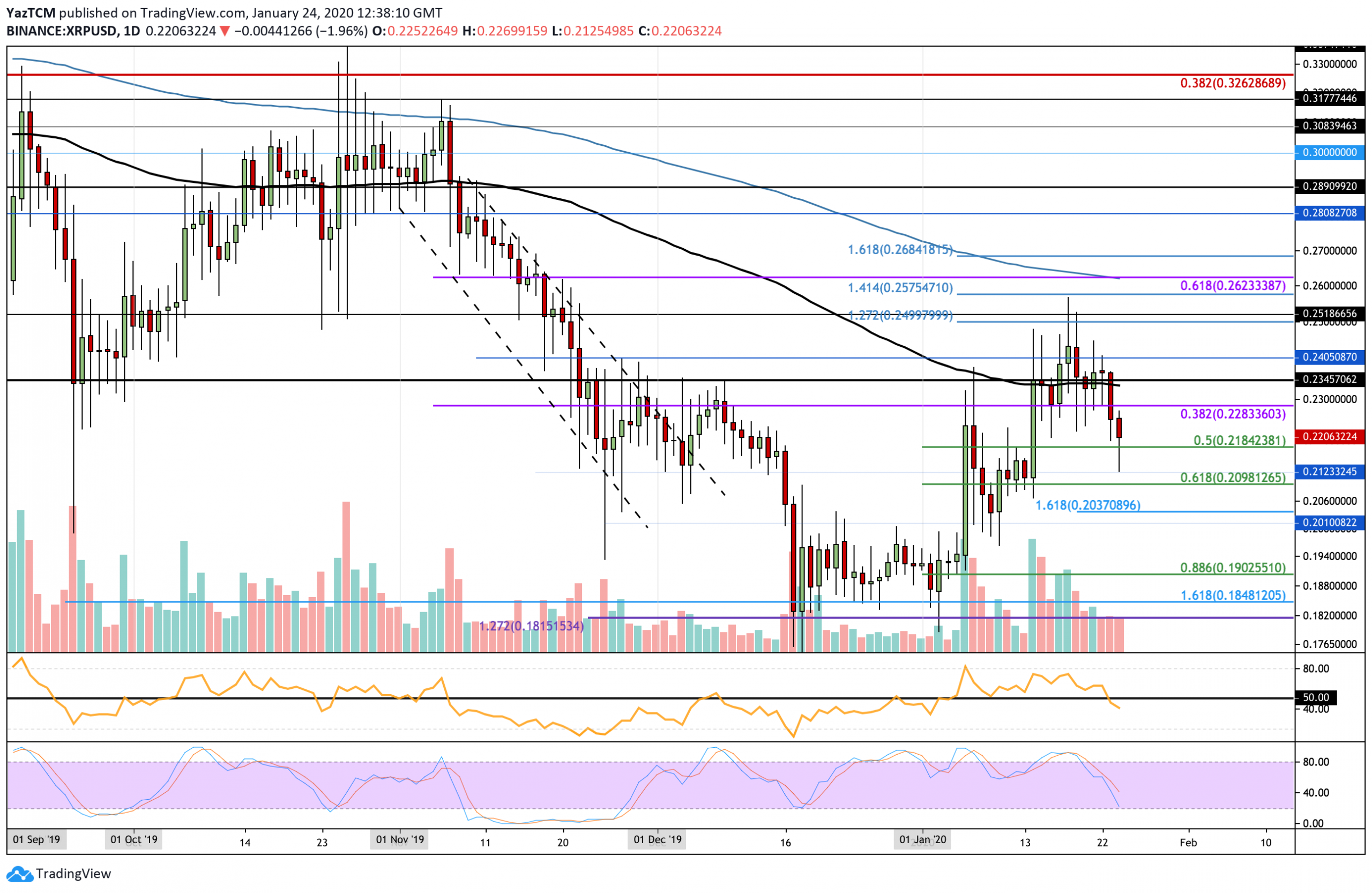 Against BTC, XRP remains range-bound as it is trapped between 2600 SAT and 2750 SAT. The cryptocurrency failed to break above the downward sloping trend line as it attempted to move higher. The sellers have now gained control over the market momentum, which could see XRP dropping beneath the range and heading toward 2500 SAT. 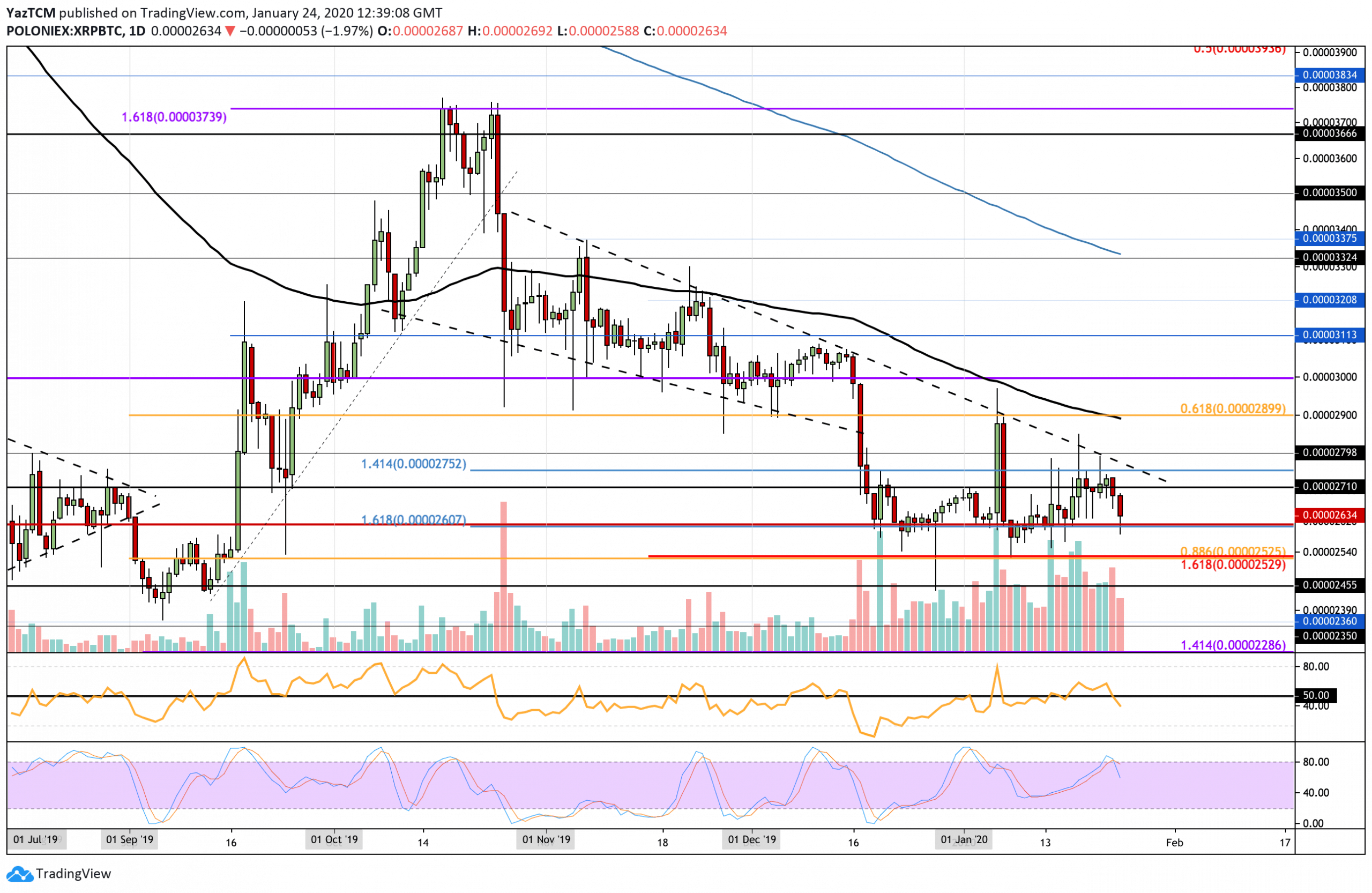 Bitcoin Cash witnessed a 7% price decline over the past week after a massive price surge that totaled 110% in January alone. The cryptocurrency trades at around $324 after rebounding from beneath $300 today. The RSI has returned to the 50 level, which shows that the market has pulled back from overextended conditions. If the RSI can remain above 50, BCH should continue further higher toward $400. 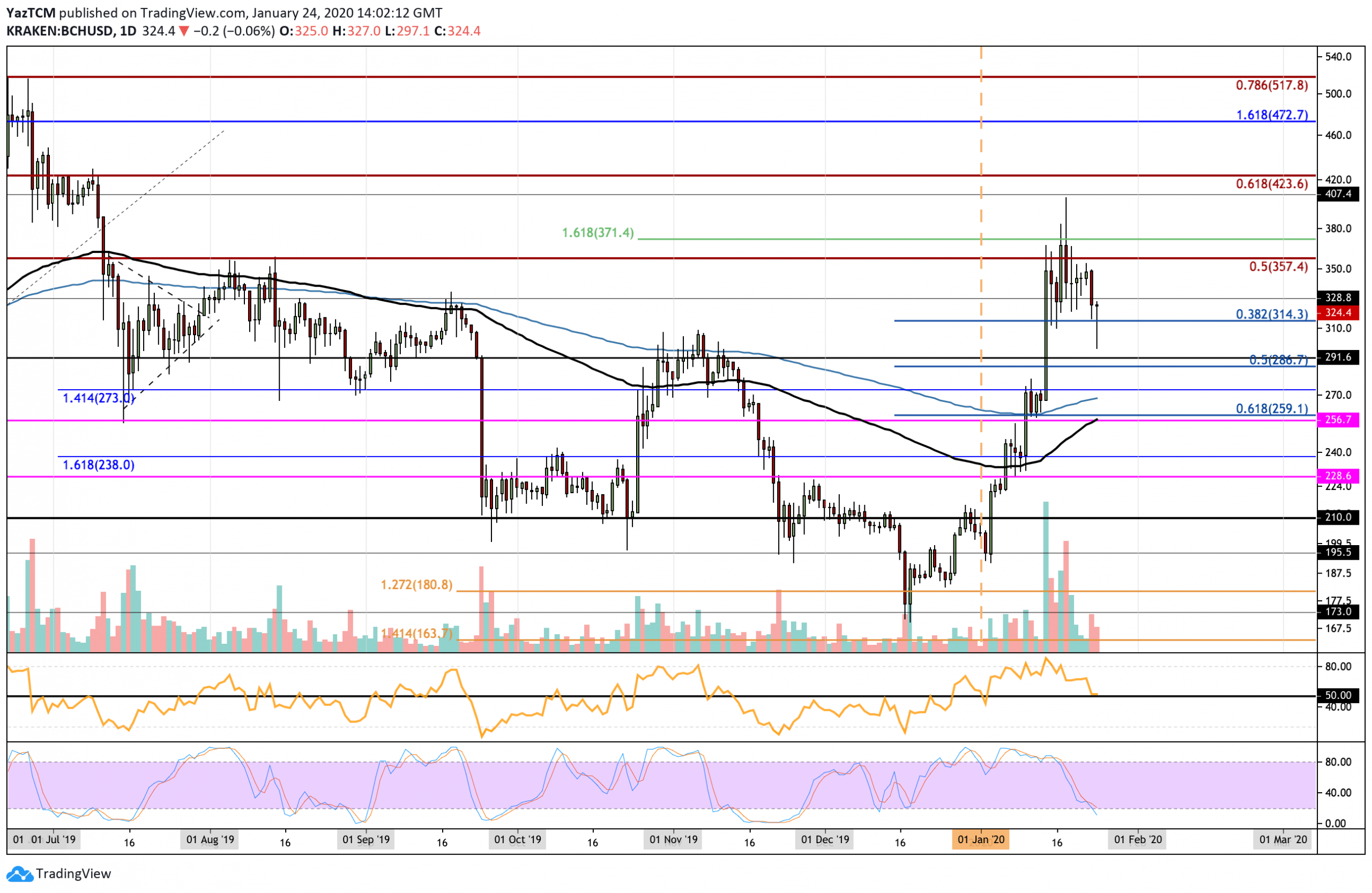 Against BTC, Bitcoin Cash managed to reach a high above 0.044 BTC this week. After meeting this resistance, it rolled over and started to fall into the current support at 0.037 BTC (short term .382 Fibonacci Retracement). The Stochastic RSI has reached extreme oversold conditions and is primed for a bullish crossover signal, which suggests that this round of selling may be reaching completion. 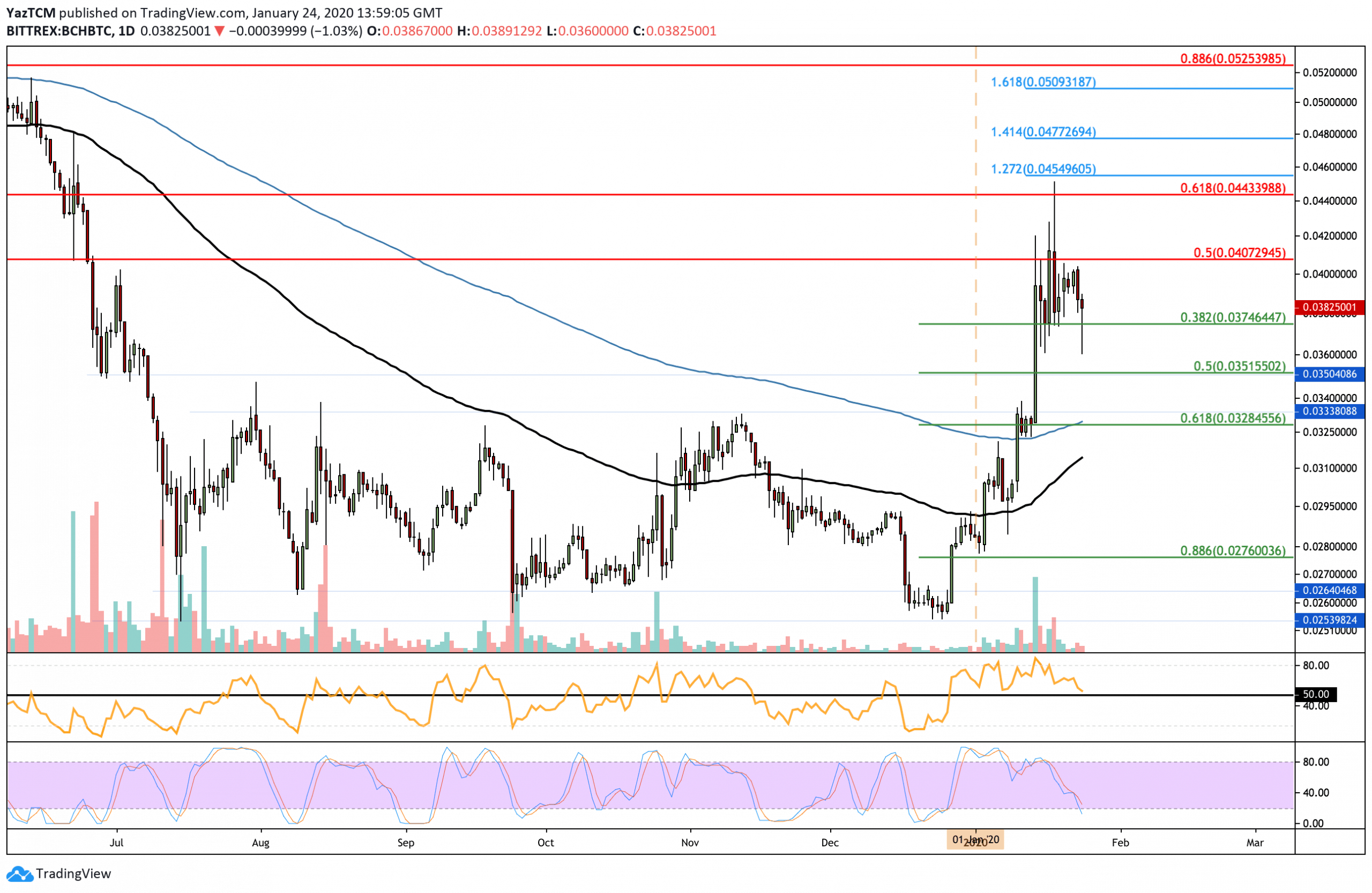 Dash dropped by a steep 14.5% this week, bringing the price for the coin down to $102. The cryptocurrency started the year off at around $40 and went on to explode by a total of 265% to reach a high of $143. Dash rolled over after meeting this resistance to trade at the current $102 level. 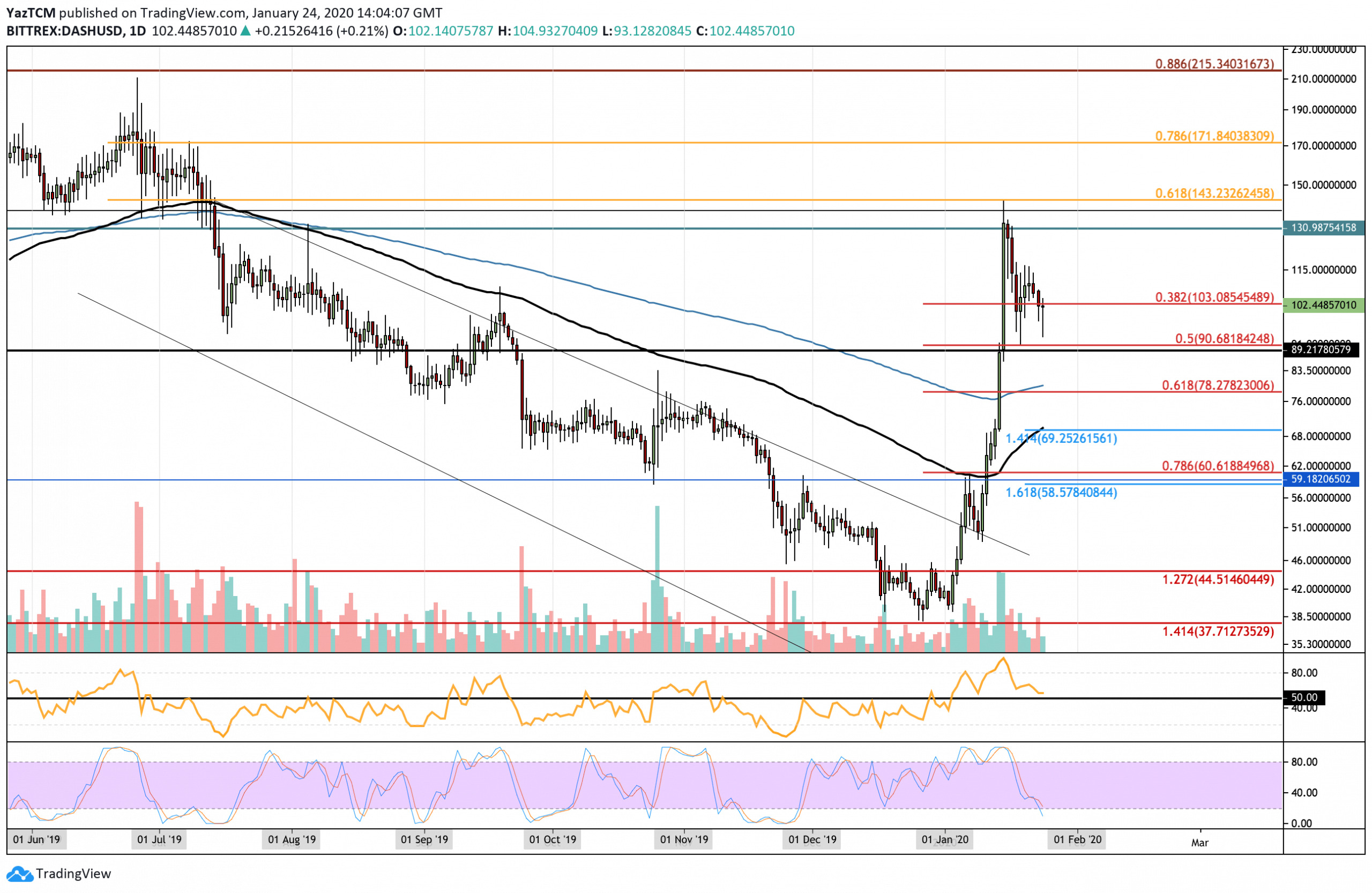 Against BTC, Dash surged above the 0.016 BTC level this week before reversing and rolling over. It found support at the 0.01 BTC level, which let it rebound to the current 0.0122 BTC trading level. The bulls remain in control of the momentum while the Stochastic RSI approaches oversold conditions that suggest a bullish push higher could be imminent. 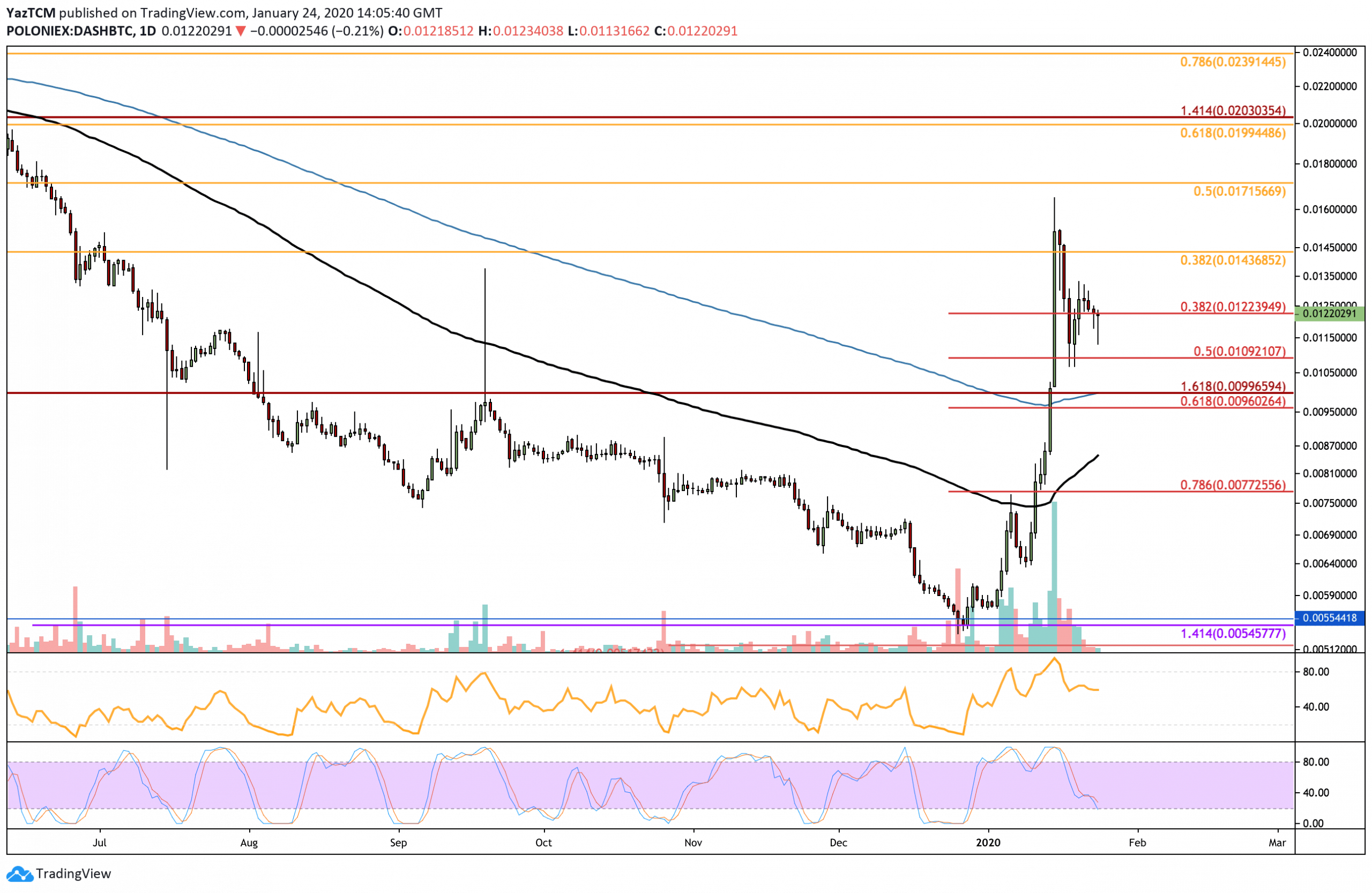