This week, the market continued to stagnate, but we saw some promising signs in the altcoin arena. While most of the attention was directed toward Bitcoin and whether its price support will hold, many traders’ interest seems to have shifted to altcoins.

Bitcoin’s dominance rate declined since peaking at 72%, and other cryptocurrencies finally managed to reclaim some ground.

Despite the fact that during the past 3 months Bitcoin’s price has shuffled up, its current price point is still respectable compared to the beginning of the year when it was trading in the low $3000’s.

Meanwhile, big companies are abandoning Facebook’s Libra, including PayPal, Visa, and Mastercard. There are growing fears that the project won’t launch at all. However, Facebook has said that it will continue with its work and that nothing has changed.

Overall, it was a positive week for altcoins which started to wake up from the crypto winter, and it was a rather quiet one for Bitcoin. 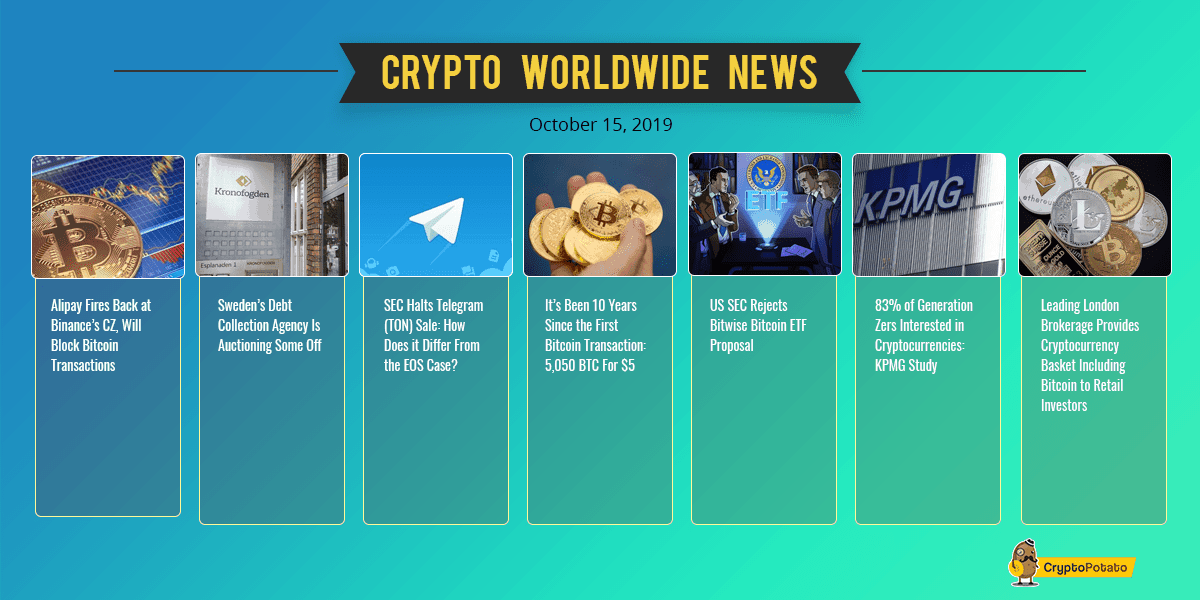 Alipay Fires Back at Binance’s CZ, Will Block Bitcoin Transactions. Alipay’s official Twitter account has responded to Binance’s Changpeng Zhao who had previously claimed that users could use Alipay to buy Bitcoin on Binance. According to the payment processor, however, this is not the case, and all transactions associated with cryptocurrencies have been halted.

Sweden’s Debt Collection Agency Is Auctioning Some Off. The Swedish Enforcement Authority auctioned off 4.59 bitcoins for around $8,200 per coin. The auction was conducted online. The main reason for auctioning it off rather than keeping it was reportedly a lack of existing infrastructure.

SEC Halts Telegram (TON) Sale: How Does it Differ From the EOS Case? The U.S. SEC has halted the sale of Telegram’s TON cryptocurrency. This happened soon after Block.one was fined for conducting its unregistered EOS initial coin offering. However, there are some key differences between the two cases.

It’s Been 10 Years Since the First Bitcoin Transaction: 5,050 BTC For $5. Ten years ago, the first Bitcoin market transaction took place. Back then, 5,050 bitcoins were sold for a grand total of $5.02. Now, they are worth upwards of $42 million. The network has grown substantially since then.

U.S. SEC Rejects Bitwise Bitcoin ETF Proposal. In a somewhat expected act, the U.S. SEC has rejected the Bitcoin ETF proposal filed by Bitwise. The Commission said that the proposal had failed to meet the necessary requirements. Its main concerns were, once again, associated with market manipulation and illicit activities.

Leading London Brokerage Provides Cryptocurrency Basket Including Bitcoin to Retail Investors. FCSM Group, a leading provider of online foreign exchange trading and related services, has announced the introduction of a cryptocurrency basket which includes Bitcoin, Ethereum, Litecoin, Bitcoin Cash, and XRP. All of the cryptocurrencies are weighted equally.

Grayscale Wins Approval for First Public Digital Currency Index Fund. Grayscale Investments has received legislative approval to list its publicly-traded digital currency index fund. It’s called Digital Large Cap Fund, and carries the ticker symbol GDLCF. It will be available to all investors who have access to US securities.