We saw a busy week with events and attempts to influence the price. Bitcoin lost a key support level of $9,000 in a sudden move downwards which took its price to where it currently trades at around $8,700. However, the volatility continues and traders who’ve taken up leveraged positions might be in trouble as it’s quite difficult to keep up with the market.

The month begins with a little enthusiasm and a quick correction which reminds us that the end of the year is approaching and there’s not a lot of time for the cryptocurrency market to move. Those who plan their taxes will have to close their positions. However, we saw an upward trend throughout most of the year and we don’t expect to see a realization of losses right before the end of the taxation period.

On the other hand, Bakkt’s volume continues to increase steadily. This could suggest that institutions are waiting for a lower price to make their entry. Yet, it’s clear that Bakkt’s impact on the market wasn’t what many expected. Instead, it was news from China which brought the market up.

Altcoins continue to hold on and some have even increased against Bitcoin and the US Dollar significantly. Of course, we haven’t seen inflows as serious as those back in 2016 and 2017. The trend is rather mixed up and this week we saw Tezos and VeChain making their holders happy with increases of around 30%. The money appears to be moving between the different cryptocurrencies after quick corrections and breakout attempts. We have yet to see if there is another chance for an altcoin season or if 2019 will go down in history as an unfruitful year for altcoins. It’s also interesting to see what will happen to Bitcoin’s dominance and which altcoins will be leading the list. 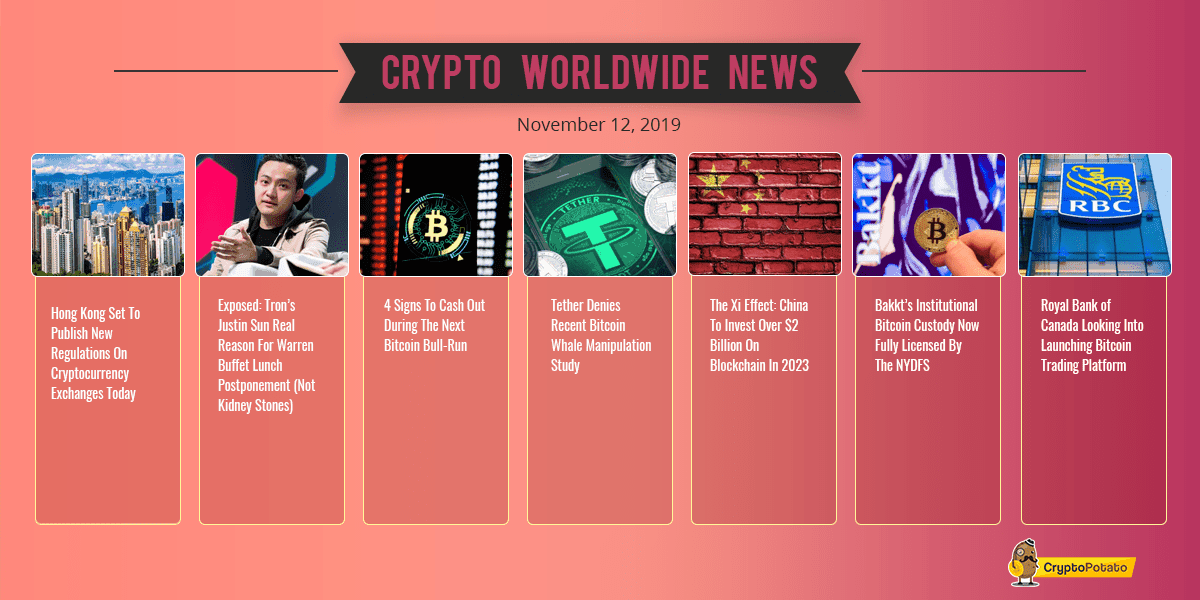 Hong Kong Set To Publish New Regulations On Cryptocurrency Exchanges Today. The financial regulators of Hong kong are reportedly introducing a new framework for cryptocurrency exchanges. The new guidelines should include KYC legislation as well as requirements for the storage of cryptocurrencies and security protocols. The move is geared at increasing investor protection.

Exposed: Tron’s Justin Sun Real Reason For Warren Buffett Lunch Postponement (Not Kidney Stones). New information has appeared regarding one of what used to be the most anticipated events within the cryptocurrency community – the lunch between Warren Buffett and Justin Sun. Supposedly, the reason for which the event was postponed is that China’s administration got involved and put extreme pressure on TRON. Sources close to the matter even revealed that at some point “lives were at risk.”

4 Signs To Cash Оut During The Next Bitcoin Bull-Run. Having a clear investment strategy is undoubtedly one of the most important things to consider when investing in cryptocurrencies. Knowing when to cash out your profits is imperative for profitability. A recent Twitter thread posed this question and the answers are seriously interesting.

Tether Denies Recent Bitcoin Whale Manipulation Study. Tether, the issuer of the most popular stablecoin, was recently under the gun as two US academics published a paper claiming Bitfinex and Tether manipulated Bitcoin’s price in 2017. The company has since come out with an official statement, denying all accusations.

The Xi Effect: China To Invest Over $2 Billion On Blockchain In 2023. The involvement of China in the field of blockchain is set to increase even further. A recent report outlined that the country will increase its investment in the field, surpassing $2 billion in 2023. This news follows the announcement of President Xi’s endorsement a couple of weeks ago.

Bakkt’s Institutional Bitcoin Custody Now Fully Licensed By The NYDFS. Bakkt, the Bitcoin futures trading platform of the Intercontinental Exchange (ICE) has managed to get an authorization for its Warehouse by the NYDFS. This will allow institutions to store their cryptocurrencies in Bakkt’s high-end storage solution, regardless of whether or not they trade futures contracts on the platform.

Royal Bank of Canada Looking Into Launching Bitcoin Trading Platform. One of the largest banks in Canada, the Royal Bank of Canada (RBC), is reportedly looking into launching a Bitcoin trading platform for investments and online purchases. The venue would also include other cryptocurrencies. The bank also considers whether or not to allow customers to open bank accounts that contain digital currencies.