Bitcoin went through yet another week full of volatility and considerable market movements. The cryptocurrency decreased by a total of about $400 in the past seven days. This happens just before the Chinese New Year, and history revealed that it has historically been a rather bad time for Bitcoin.

However, it’s also worth noting that the world’s largest cryptocurrency managed to defend the critical support levels at around $8,200 and $8,300 and bounced back from there. As such, it appears technically healthy, and the correction from $8,900 at the beginning of the week might have been a healthy one.

At the same time, the week was full of action in the altcoin arena as well. There were serious movements in the price of Bitcoin Cash, Bitcoin SV, DASH, Tezos, and others. Bitcoin’s dominance managed to increase to about 66.2%. A recent survey revealed that investors are diversifying their portfolios, as the majority of them are putting their money in Bitcoin and less than five other cryptocurrencies.

Exciting news came from Tether, the issuer of the most widely used stablecoin, USDT. The company launched a gold-backed token based on Ethereum and Tron, called XAUt. The barrier to entry, however, seems a bit steep and oriented towards larger investors. The minimum amount that users can purchase equals about $75,000.

It’s also worth noting that the field is receiving a serious amount of attention as the World Economic Forum took place this week at Davos. Different investors and influential individuals expressed their opinion on cryptocurrencies and their role in the financial system. The talks, for the most part, circulated the idea of central bank digital currencies (CBDCs). A recent report by the Bank of International Settlements showed that at least 80% of the surveyed banks are already researching CBDCs.

In general, the action remains interesting, and the market doesn’t disappoint in terms of excitement. It’s interesting to see where Bitcoin will go in the few months left before the halving. 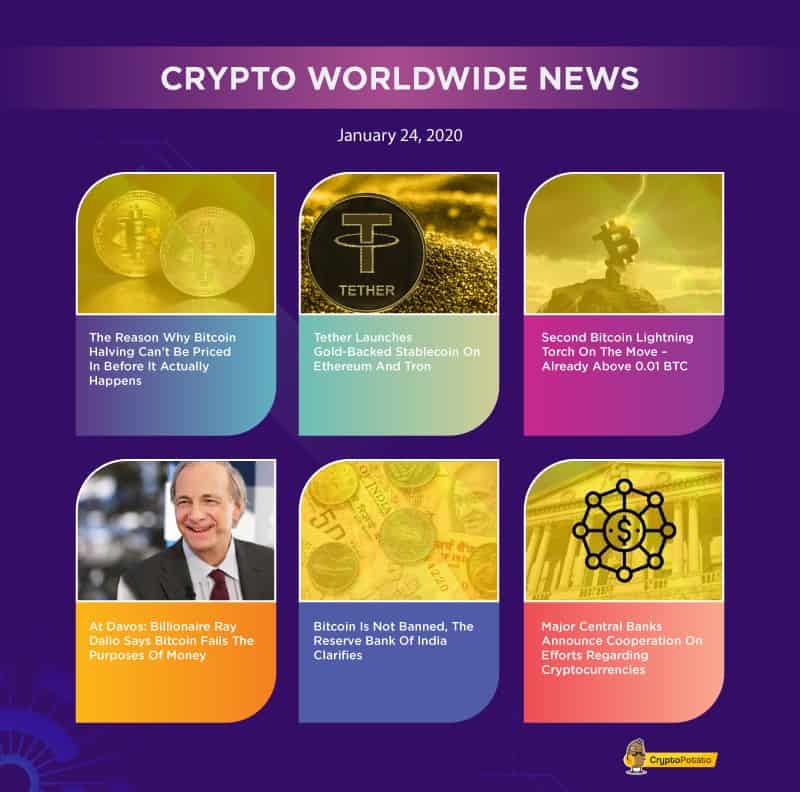 The Reason Why Bitcoin Halving Can’t Be Priced In Before It Actually Happens. As Bitcoin’s halving approaches, a lot of people are debating over whether or not it is already priced in. According to a well-known analyst, the halving can’t possibly be factored in the price because the reduction of Bitcoin’s supply to the market hasn’t yet happened.

Tether Launches Gold-Backed Stablecoin On Ethereum And Tron. Tether, the issuer of the most popular stablecoin, USDT, has launched a new token that’s backed by actual gold. The coin is ticked XAUt, and it will be available for relatively larger investors as the minimum purchase amount equals about $75,000.

Second Bitcoin Lightning Torch On The Move – Already Above 0.01 BTC. Arguably one of the most popular and exciting phenomenons in the cryptocurrency field, the Lightning Torch, has taken off again. In the few short days since it started circulated the globe, it has already crossed a multitude of countries and changed a lot of hands, raising awareness of Bitcoin’s Lightning Network.

At Davos: Billionaire Ray Dalio Says Bitcoin Fails The Purposes Of Money. As the World Economic Forum took place this week at Davos, Ray Dalio, a well-known billionaire investor, shared his opinion on Bitcoin. He thinks that it fails the purpose of money and that it can’t be considered as a store of value.

Major Central Banks Announce Cooperation On Efforts Regarding Cryptocurrencies. Central Bank Digital Currencies (CBDCs) have been a hot topic this year. A number of major central banks have come together in a joint effort to explore the benefits of digital assets and their impact on existing economies.

This week we have a chart analysis of Bitcoin, Ethereum, Ripple, Bitcoin Cash, and Dash – click here for the full price analysis.