Bitcoin Steady Above $6,000 As The US Surpasses China In COVID-19 Cases: The Crypto Weekly Update

In the past seven days, bitcoin managed to add another 10% to its dollar-value as the price spiked from about $6,000 to its current point at $6,600. Yet, most of the time, it traded within a narrow range between $6,400 and $6,700. The overall volume has also declined, and, as such, the volatility decreased. If one thing is sure, though, is that Bitcoin doesn’t like to stay calm for long periods, and major action is likely underway.

Most of the altcoins are following in Bitcoin’s lead and remained stable over the week. This is the main reason for which Bitcoin’s dominance almost didn’t move a bit and is only up a tiny 0.2%. The cryptocurrency that stands up on top of the crowd over the last seven days is XRP, as it’s up about 19% from its low seven days ago, with the majority of it gained today.

The overall economic outlook, however, continues to look troublesome. The US is working on a bill that would allow the Federal Reserve to print trillions of dollars in the form of stimulus for the economy.

While this is providing certain short-term relief and the major indices are seemingly recovering, a lot of experts and analysts fear that this would have a terrible long-term effect on the Dollar and the economy.

This week was also interesting from another standpoint. Bitcoin seems to be decoupling from traditional stocks. According to many industry proponents, that’s what the cryptocurrency needs to shine in the unwinding global financial crisis.

It remains interesting to see where the markets will head, especially now as the US has officially surpassed China in terms of infected people with the novel coronavirus (COVID-19). 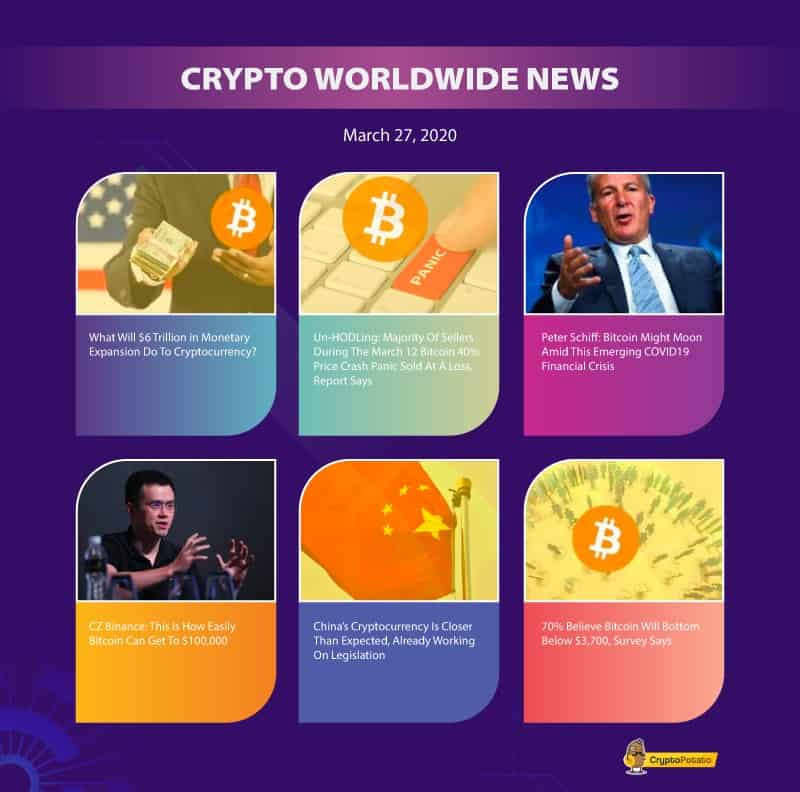 What Will $6 Trillion in Monetary Expansion Do To Cryptocurrency? (Opinion). The COVID-19 coronavirus caused a major strain on the global economy. As such, the US intends to inject as much as $6 trillion to keep its economy from freefalling and regular people afloat. It’s interesting to see what impact this will have on cryptocurrencies.

Un-HODLing: Majority Of Sellers During The March 12th Bitcoin 40% Price Crash Panic Sold At A Loss, Report Says. Bitcoin saw one of its worst trading days on March 12th, losing more than 40% of its value in less than 48 hours. A recent report shows that the majority of people panic-sold at a loss throughout the time of the violent crash.

Peter Schiff: Bitcoin Might Moon Amid This Emerging COVID19 Financial Crisis. Peter Schiff, a well-known and renowned economist, thinks that the current financial crisis will be worse than the one from back in 2008. However, he also said that Bitcoin might surge and even reach new highs.

CZ Binance: This Is How Easily Bitcoin Can Get To $100,000. Changpeng Zhao, the CEO of the world’s leading cryptocurrency exchange Binance, said that it’s easy to put Bitcoin on a $2 trillion market cap now that the FEDs are pumping $6 trillion into the economy. This would put Bitcoin at $100,000.

China’s Cryptocurrency Is Closer Than Expected, Already Working On Legislation. Regardless of the delay, the People’s Bank of China (PBoC) is closer to launching its government-backed digital currency. It’s reportedly working together with several large private companies, and it has finished the development.

70% Believe Bitcoin Will Bottom Below $3,700, Survey Says. The sentiment amid the cryptocurrency community isn’t very positive throughout the past couple of weeks. According to 70% of the voters in a recent poll, Bitcoin is going to bottom below $3,700. This indicates that they think the price is far from having capitulated.

This week we have a chart analysis of Bitcoin, Ethereum, Ripple, Monero, and IOTA – click here for the full price analysis.