An interesting poll on Twitter revealed that if Bitcoin’s price reached $100,000, most people would prefer to sell either all or some of their holdings for fiat. A comparison with another poll, however, shows an exciting consistency with what Bitcoin holders supposedly intend to do.

One of the most important decisions that an investor has to do is to come up with an exit strategy. In other words, they need to have a clear picture in mind as to when to sell their holdings.

Bitcoin is no different. Despite the multitude of specifics that it has compared to traditional assets, it’s also an investment option as any other – its price goes up and down. As such, those who buy it as a means of investment need to come up with a figure at which they’d eventually dispose of their holdings. 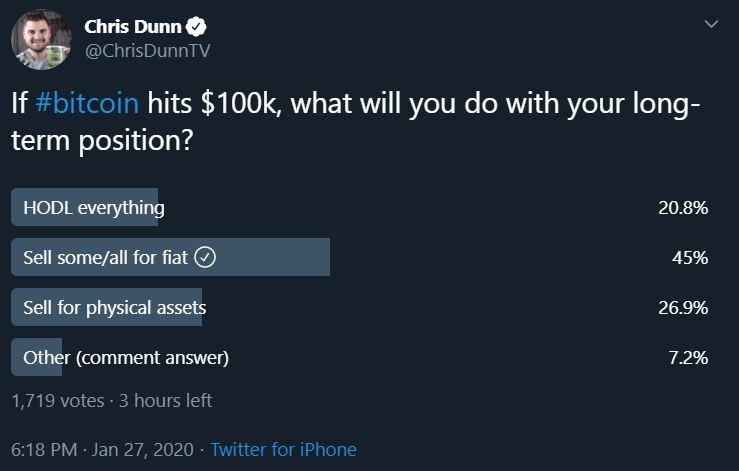 In a straightforward question, Dunn asks Bitcoin holders what they would do if BTC’s price reaches $100,000. Over 1,700 people took part in the survey, where 45% of them answered that they would sell some or all of their BTC for fiat.

Another major part of the voters answered that they would sell their Bitcoin for physical assets. In other words, $100,000 seems like a number that a lot of people consider as a price target to dispose of their BTC holdings, at least partially.

Going beyond this, however, the poll also reveals a very interesting similarity when compared to a similar survey from not so long ago. In late 2019, Cryptopotato reported on a similar poll carried out by Binance Life, which showed that 23% of the people don’t intend to sell their Bitcoin holdings at all.

This brings us to the other group of people who buy Bitcoin – those who are in it for what it was intended to be – a viable, peer-to-peer means of electronic payments. In a scenario where Bitcoin replaces traditional fiat currencies, however far-fetched this might seem right now, one wouldn’t need cash as he’d be spending his bitcoins instead.