Enjin Partners Up With Microsoft

Microsoft and Enjin have teamed up to create Azure Heroes – a project that rewards contributors to the community for posting content, creating demos, building sample code, and blogging about Azure.

Creators are nominated and receive a collectible “digital badger,” a digital badge, relating to their field in which they have contributed. These digital badgers have a very limited supply and cover categories such as Content Hero, Community Hero, Mentor, and Maker.

These badger heroes have been tokenized as assets on the Ethereum blockchain, and therefore, we can be sure that they are limited edition! Each season the collaboration will see a release of a new set of badgers that also will have a finite supply! Those that are selected to become an Azure Hero will scan their QR code, and the non-fungible token (NFT), the badger, will instantly be transferred into their ownership for their usage!

The announcement of this partnership has caused Enjin to surge by a momentous 60%. 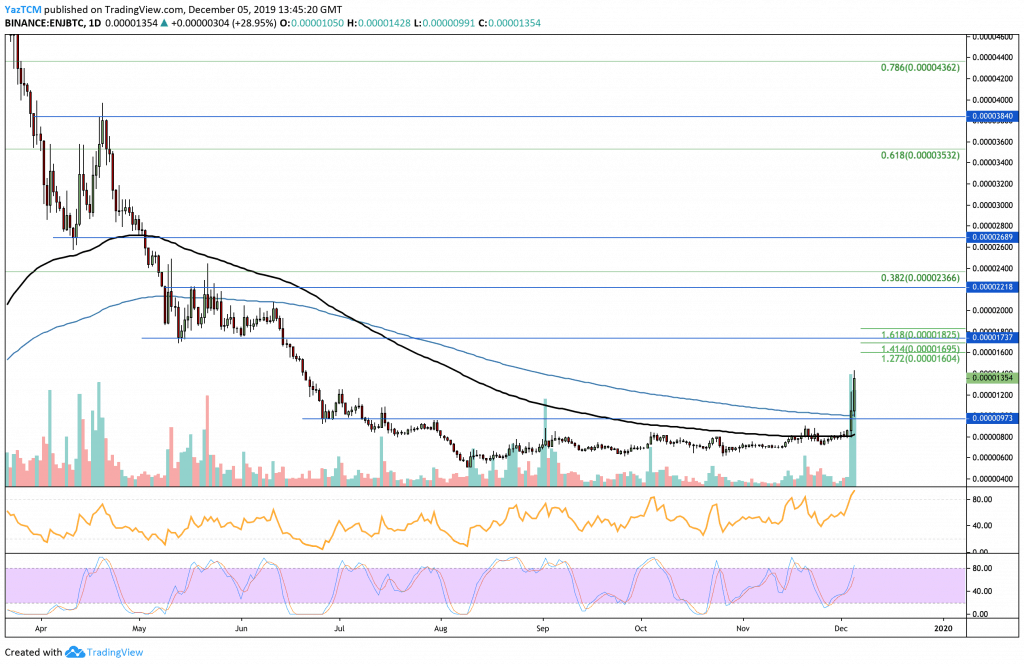 Analyzing the daily chart above, Enjin surged significantly over the past two days, increasing by a total of 60%. This caused it to smash the resistance at 1000 SAT, which is bolstered by the 200-days EMA.

ENJ continued higher to reach the current trading price of around 1290 SAT – creating a fresh 7-month high that has not been seen since June this year.

If the buyers continue to push the market higher, we can expect immediate resistance to be located at 1604 SAT and 1740 SAT. Above this, resistance lies at 1825 SAT (1.618 Fibonacci Extension level).

The RSI is approaching extreme overbought conditions, which could be a sign that the market may be overextended, which is unsurprising when we consider the parabolic move.