The last week of 2019 didn’t really bring a lot of excitement within the cryptocurrency market. Bitcoin’s price remained trapped within a fairly narrow range between $7,100 and $7,700, while altcoins struggled to claim any new grounds.

As a matter of fact, Bitcoin’s dominance stabilized well above 68%, which showed that BTC kept its market share intact, despite the lack of any price increases. Despite the fact that Christmas is over, it’s important to monitor the price going forward. It’s likely that Bitcoin will retest the $7,000 once again and it’s crucial to see what happens there.

On another note, the week was very intense in terms of news regarding state-backed cryptocurrencies. A few countries, amid which Russia and Korea, said that they are testing their own iterations and have expressed positivity towards the notion.

With the new year coming ahead, one of the most anticipated events remains the Bitcoin halving. It will slash the block reward in half and a lot of people believe that this will be a cause for a surge in the price. Meltem Demirors, however, thinks that this won’t be the case, mostly because the market is mainly driven by derivatives trading. If history is any indicator, so far, the price has surged after each halving in the year that followed.

The week was also full of controversy, as the world’s largest content-sharing platform, YouTube, appeared to have flagged cryptocurrency-related videos and even deleting them. Numerous prominent analysts saw their channels getting flagged, which was a cause for very serious concern. Shortly after, YouTube said that this was a mistake, but a lot of the videos remain deleted. This also showcases the importance of decentralization and one of the most critical benefits that it brings – censorship resistance.

In any case, there are a few more days left until the end of 2019 and it’s interesting to see if Bitcoin and the entire market will bring a pleasant surprise or if we will kick off the new year in the red. 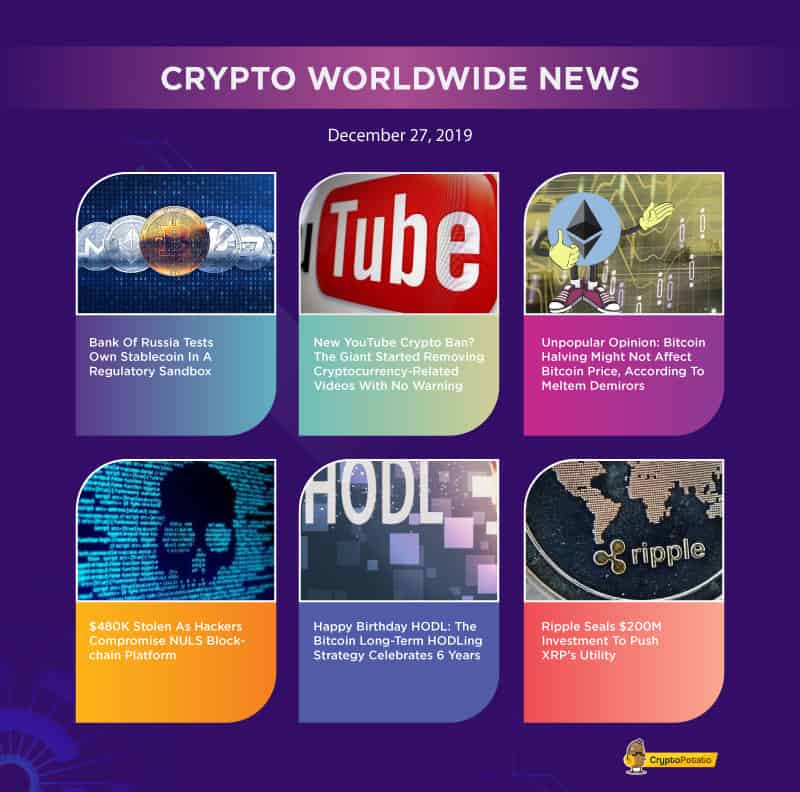 Bank of Russia Tests Own STablecoin In A Regulatory Sandbox. As the trend of state-backed cryptocurrencies continues to steam, Russia is another country that considers the opportunity. Its’ central bank has reportedly started testing digital currencies that are backed by real assets in a regulatory sandbox.

New YouTube Crypto Ban? The Giant Started Removing Cryptocurrency-Related Videos With No Warning. The world’s largest content-sharing platform, YouTube, appeared to have restricted and deleted cryptocurrency-related videos and channels. Even though the issue seemed to have been a mistake, a lot of influencers were affected and it showed the censorship that centralized platforms are capable of inflicting at will.

Unpopular Opinion: Bitcoin Halving Might Not Affect Bitcoin Price, According To Meltem Demirors. While a lot of people are excited about the upcoming Bitcoin halving and the potential impact on BTC’s price, Meltem Demirors has a different view. She thinks that it won’t affect it as much because the market is mainly driven by derivatives, which suggests that the actual transfer of bitcoins and the demand for them isn’t as much.

$480K Stolen As Hackers Compromise NULS Blockchain Platform. The NULS Blockchain platform was compromised this week. Hackers managed to breach their security, stealing upwards of $480,000 worth of NULS tokens. They managed to get away with more than 2% of the total amount of tokens in circulation.

Ripple Seals $200M Investment To Push XRP’s Utility. Ripple has managed to cap off the year by raising an additional $200M in a Series C investment round. The money will be used for improving the protocol, as well as to push further the utility of XRP.

This week we have a chart analysis of Bitcoin, Ethereum, Ripple, Dash, and Cosmos – click here for the full price analysis.