LTC Surges 25% In A Week But Can Bulls Keep Up? 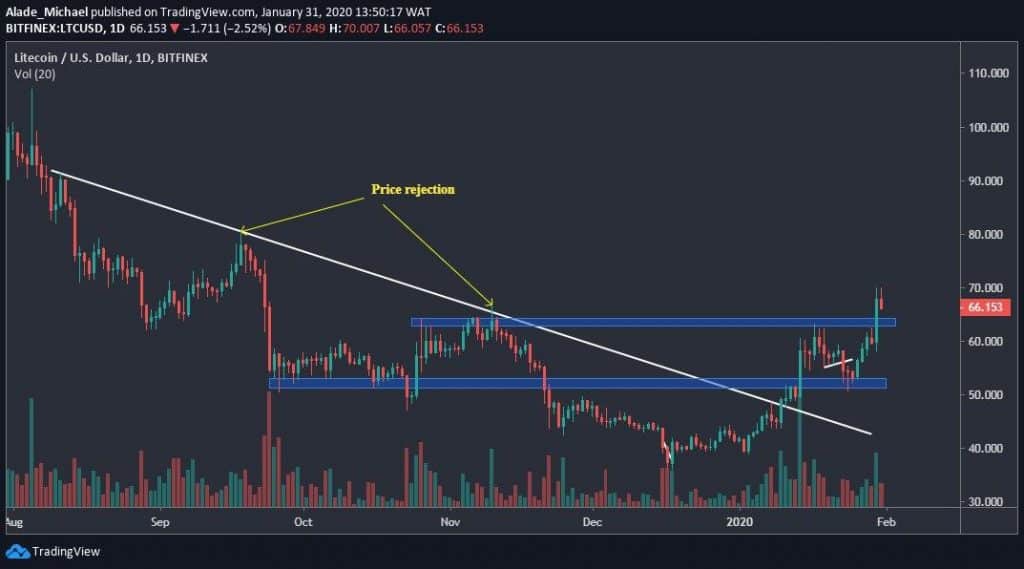 Over the past few hours, Litcoin saw a sizeable increase after surging by about 15% to touch $70. At the moment, LTC price has dropped to $67 against the US Dollar. Notwithstanding, the buyers are still showing commitment, so it’s possible for the price to increase in the coming hours.

Meanwhile, this bullish sentiment was triggered by the early year breakout, which has brought a lot of gains for Litecoin over the past weeks. Followed by a healthy correction in mid-January, Litecoin’s bulls reiterate actions to keep the market sentiment alive. At the time of writing, LTC remains the 7th largest cryptocurrency with a market cap of about $6.5 billion.

Following a series of price rejection this month, Litecoin broke out of a long downward range, pulled back, and continued to follow bullish bias. The most notable increase was the last 24-hours rally that surged Litecoin at $70 a few hours ago, although the market was bouncing from the January 24 low – where the blue support zone of $53 lies. Apart from that, new support is now established at $64, near the current price.

After breaking above $64, LTC is currently poised for a massive gain, which is expected to reach $100 in the next few days. But considering a closer resistance for this market, the next bullish rally is expected to hit $80 in no time. At the moment, the $70 price level is still proving difficult for the bulls to surpass. If they successfully overcome this level, we can anticipate an intense buying pressure to play out. 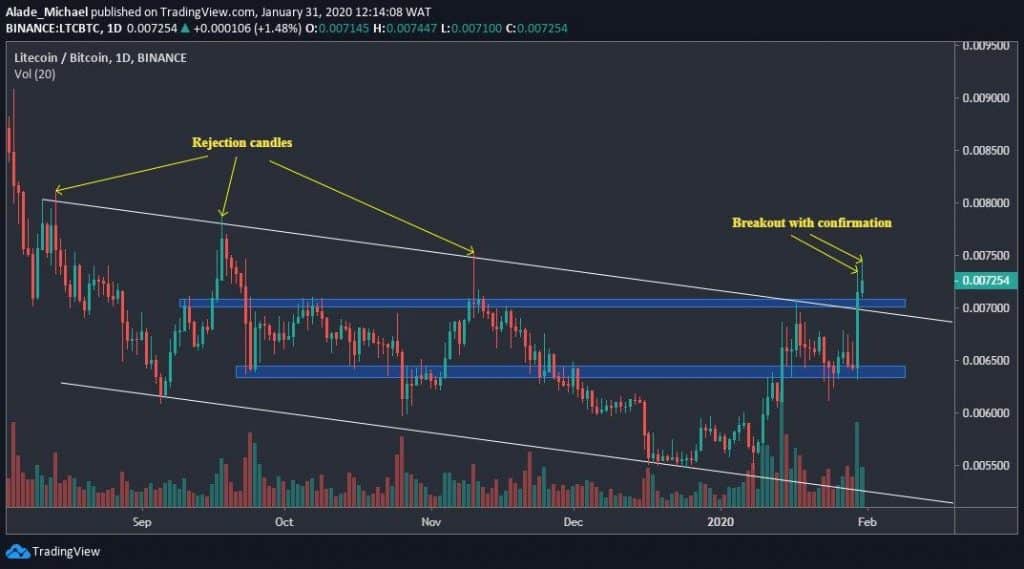 Against Bitcoin, Litecoin’s price witnessed significant growth over the last 24 hours. With a small rejection around 0.0075SAT level, Litecoin is hovering around 0.00725SAT level, with about 10.1% gains at the time of writing. However, bulls are still showing interest in this trade. We can expect the price to keep rising.

If a correction occurs, however, Litecoin may lose momentum back in the channel, which could lead to a false breakout on the daily chart. We may need to watch the market behavior for a while. Most importantly, a pullback could provide more opportunities for the bulls. For now, Litecoin is still under the bull radar.

Litecoin confirms a long-term breakout for the bulls after spiking above the descending channel yesterday. This channel trapped LTC price in a bearish zone for the past months following a series of rejections, as indicated on the daily price chart. More importantly, Litecoin is now trading well above the 0.007SAT level – where the blue support area lies. Though, there’s near support at 0.0065SAT level, from where Litecoin’s surged yesterday.

Considering this breakout with confirmation, Litecoin still needs to push further to keep the bull’s hope alive. If such a scenario plays out now, we can expect Litecoin to advance higher to 0.008SAT and 0.0085SAT resistance levels in the coming days. Shortly after this move, Litecoin is likely to pull back near 0.007SAT support level before the price bounces back. As of now, the buyers are deciding on the next major rally.