November Ending in Red As Bitcoin Is Down $1500: Crypto Weekly Market Update

It has been an exciting week for Bitcoin. Volatility is back as the price went on a rollercoaster throughout the past seven days. The cryptocurrency started the week trading at around $7,150, dropped to a low of about $6,600 only to recover get up to $7,800. However, throughout the volatile month of November, Bitcoin lost upwards of $1,500 of its value.

At the same time, despite Bitcoin’s violent price action, its dominance index remained flat around 66%. This means that altcoins managed to stand their ground and didn’t lose their market share. Indeed, some of them noted substantial gains throughout the month. Perhaps the strongest performer is Tezos (XTZ) that’s up almost 50% since the beginning of November. In any case, the past week, despite the ups and downs, has been positive for the altcoin market as the majority of large-cap cryptocurrencies are marking steady gains.

Unfortunately, the week had its fair share of FUD and turmoil as well. UpBit, a popular South Korean cryptocurrency exchange, was hacked. This resulted in the loss of $50 million worth of Ethereum. Just today, IDAX, another exchange, this time from China, announced that it’s freezing withdrawals because their CEO has gone missing. This goes on to show that there’s still plenty of room for improvements and stability in the field.

However, there was some truly positive news as well. One of the more essential announcements came from Germany, as the country has passed a draft bill which, if approved, would allow banks to store Bitcoin and offer other cryptocurrency services to its clients. Bakkt’s steadily rising volumes also indicate that there is an increasing institutional interest flowing into the market, which is more than welcome.

In short, it has been a very eventful week in terms of both news and price action. As we approach the end of the year, it’s interesting to see where Bitcoin’s price will take us, stepping into 2020. 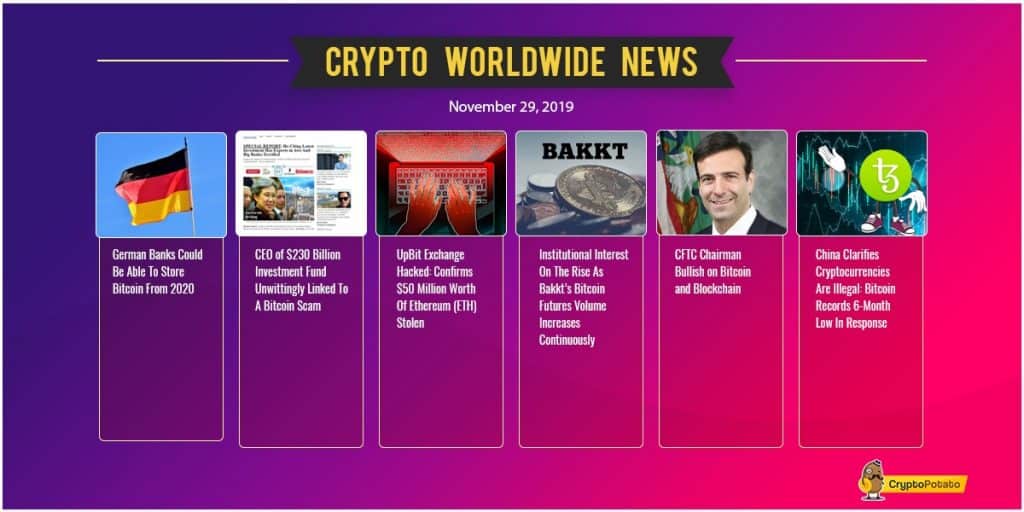 Report: German Banks Could Be Able To Store Bitcoin From 2020. According to a report from local media, Germany has passed a draft bill which, if approved, would allow banks to store Bitcoin and deliver other cryptocurrency services. The changes should take effect from the beginning of 2020.

CEO of $230 Billion Investment Fund Unwittingly Linked To A Bitcoin Scam. The head of a $230 billion Singaporean investment fund has been linked to a falsified Bitcoin ad that aims to scam people out of their money. The high-ranked executive has already made an official statement, urging people to take care and to make sure to stay away from false ads of the kind.

UpBit Exchange Hacked: Confirms $50 Million Worth of Ethereum (ETH) Stolen. The popular Korean cryptocurrency exchange UpBit has been hacked. The CEO confirmed that $50 million worth of ETH has been stolen from the venue but has also reassured that the company will cover the losses from their own money.

Institutional Interest On The Rise As Bakkt’s Bitcoin Futures Volume Increases Continuously. Institutional interest in the cryptocurrency market seems to be increasing. This becomes clear as Bakkt’s trading volume is on the rise steadily, and it keeps getting higher. Other products oriented towards institutions such as Grayscale’s Bitcoin Trust are also getting more and more traction.

CFTC Chairman Bullish On Bitcoin and Blockchain. The Chairman of the United State’s Commodity Futures Trading Commission (CFTC), Heath Tarbert, has expressed his views on the matter of Blockchain and cryptocurrencies. He thinks that the technology is promising and that the US should be the one to lead in this regard.

China Clarifies Cryptocurrencies Are Illegal: Bitcoin Records 6-Month Low In Response. China has once again reiterated that cryptocurrencies are illegal within the country and that its stance on the matter remains unchanged. Almost immediately after the news, Bitcoin lost about $500, marking a 6-month low.

This week we have a chart analysis of Bitcoin, Ethereum, Ripple, Tron, and Matic – click here for the full price analysis.