Records Are Breaking As Bitcoin Stuck Above $7000

December 2019 is already here, and it came in kicking. November’s volatility doesn’t seem to end, as, in the past seven days alone, Bitcoin went through a couple of significant swings. The world’s largest cryptocurrency reached a high of around $7,800 in the past week, only to decrease to as low as $7,150 and recover a few days later to where it’s currently trading at around $7,460.

On another note, Bitcoin’s network has demonstrated its enhanced capabilities as it processed over $8.9 billion in a single hour, setting a brand new record. Not only has the cryptocurrency increased in value over the past few years, but its network is also maturing, highlighting some of its essential benefits. Adoption also continues, even at slow rates, as Tokyo-based Softbank announced its new debit card, which will support cryptocurrencies as well.

Meanwhile, Bitcoin’s dominance continues to struggle between 66% and 67%, meaning that altcoins are still able to hold their grounds. Some of them made impressive strides, including MATIC, which noted 160% bi-weekly gains, starting its very own private altcoin season.

Enjin Coin also gained upwards of 60% following an announcement that they have partnered up with Microsoft. Other large-cap cryptocurrencies such as Litecoin, Ethereum, Binance Coin, and so forth, remained range-bound for the most of the week.

On another note, some of this week’s news showcase that the market is still very young and has a lot of room for improvement. For instance, wash trading continues to be a problem, as CoinMarketCap showed that 93% of all of the circulating supply of Litecoin changed hands in a single day. Moreover, cryptocurrency hedge funds are also closing down this year, suggesting that the market is still driven mostly by retail investors.

As we dive deeper in December, it remains interesting to see whether bulls will take over and trigger the much-awaited Christmas rally or if bears push the market lower. In any case, we are in for one exciting December. 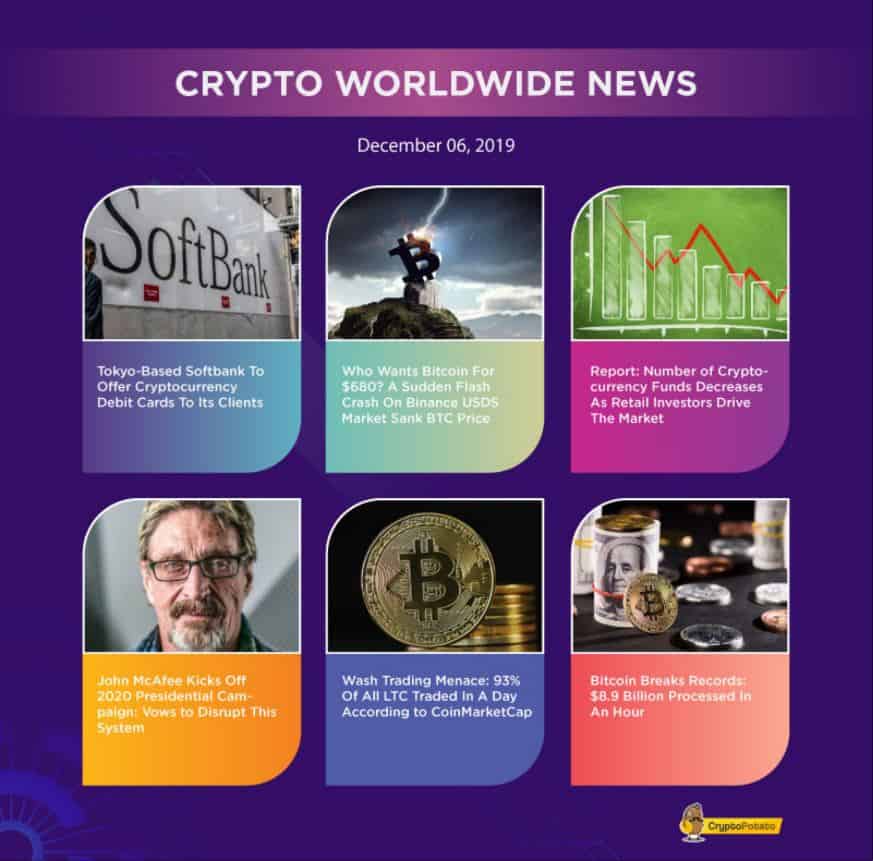 Tokyo-Based Softbank to Offer Cryptocurrency Debit Cards To Its Clients. One of the more popular banks in Japan, Softbank, has announced that they will introduce a new type of debit card equipped with IoT chips, which could be used as a cryptocurrency wallet as well. Clients will be able to operate with both fiat currencies and digital assets.

Who Wants Bitcoin For $680? A Sudden Flash Crash On Binance USDS Market Sank BTC Price. Bitcoin went through a sudden flash crash on the world’s leading cryptocurrency exchange, Binance, against the USDS stablecoin. The price dropped to as low as $680 only to recover moments later, benefiting those who had set low buying orders in the process.

Report: Number of Cryptocurrency Funds Decreases As Retail Investors Drive The Market. According to a recent report, more than 70 cryptocurrency funds have closed this year alone. The majority of them served wealthy individuals and family offices. The number of newly-launched cryptocurrency funds has also decreased in 2019. This outlines that the market, in its majority, is still driven by retail investors.

John McAfee Kicks Off 2020 Presidential Campaign: Vows To Disrupt This System. The legendary entrepreneur and well-known cryptocurrency proponent, John McAfee, has announced that his 2020 Presidential campaign has officially begun. While he outlined that he can’t become a president, he has also shared that he can disrupt the existing system and that he fully intends to do so.

Wash Trading Menace: 93% Of All LTC Traded In A Day According to CoinMarketCap. Prominent analysts have pointed out that the issue with displaying wash trading information on the popular monitoring resource CoinMarketCap continues. According to the website, 93% of all Litecoin in circulation changed hands in a day, which is peculiar.

Bitcoin Breaks Records: $8.9 Billion Processed In An Hour. Bitcoin’s network continues to prove that it’s capable of handling large transactional volumes as it has processed a whopping $8.9 billion in a single hour. This is a new record in terms of hourly USD transaction volume and also represents a huge increase compared to previous years.

This week we have a chart analysis of Bitcoin, Ethereum, Ripple, Raven, and Matic – click here for the full price analysis.