The last week was action-packed for Bitcoin but also for altcoins. The entire market was on a wild ride, seeing notable gains and sharp declines.

After plunging to about $9,300 in a violent hourly candle, Bitcoin recovered, and it currently trades at around $9,700. This is also the first level of resistance on the way up, and if it manages to break it, $9,900 will follow. On the way down, the first significant support level lies at $9,550, which proved to be strong in the past couple of days. Below that, there’s $9,400.

This week’s headlines were mostly about Tezos as the coin didn’t fail to amaze. It almost touched $4 on its way up and continues to break records. Tezos has climbed its way up to the 10th spot in terms of market capitalization. Even though it has retraced from there, the cryptocurrency remains one of the most interesting to look at. In the past seven days, Bitcoin’s dominance is up about 1.5%, which signals that altcoins may be having harder times.

It’s also worth noting that the entire industry continues to receive attention. US Presidential candidate Michael Bloomberg suggested to speed up the work on cryptocurrency regulations as a means of preventing another financial crisis. Just the fact that digital assets are included in his policy is strong enough.

If one thing is certain, it’s that there are exciting weeks ahead in the market. The volume keeps on increasing across the board, and more volatility might be inbound. 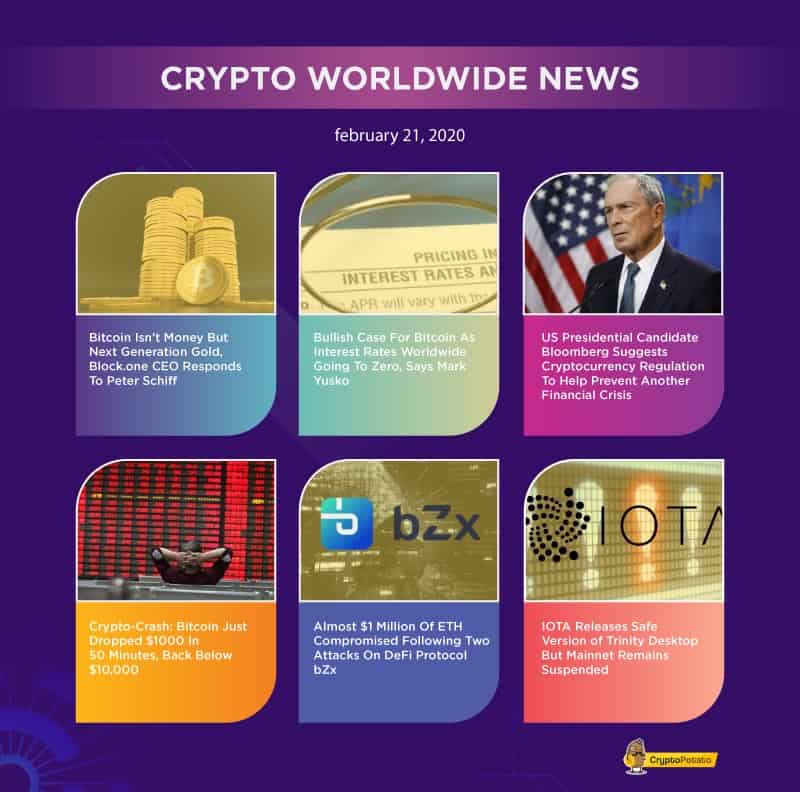 Bitcoin Isn’t Money But Next Generation Gold, Block.one CEO Responds To Peter Schiff. The CEO of Block.one – the publisher of EOS, Brendan Blumer, has said that Bitcoin isn’t money and that it never will be. At the same time, he thinks that it’s the next generation of gold. His thoughts came as a response to Peter Schiff, who once again took the chance to bash Bitcoin.

Bullish Case For Bitcoin As Interest Rates Worldwide Going To Zero, Says Mark Yusko. According to the Founder and CEO of Morgan Creek Capital, Mark Yusko, interest rates across the globe are going to zero. He believes that this is bullish for Bitcoin and that it will help it grow in value.

US Presidential Candidate Bloomberg Suggests Cryptocurrency Regulation To Help Prevent Another Financial Crisis. The candidate for US President, Michael Bloomberg, published a formal financial reform plan. The document also mentions the creation of a clear regulatory framework for cryptocurrencies. Bloomberg seems to believe that they have become an asset class, and regulatory oversight continues to be underdeveloped.

Crypto-Crash: Bitcoin Just Dropped $1000 In 50 Minutes, Back Below $10,000. In a sudden and violent red candle, Bitcoin lost $1000 in 50 minutes. The move brought its price below the $10,000 mark. This marked yet another volatile price action, which has become a flagship of the cryptocurrency since the beginning of 2020.

Almost $1 Million Of ETH Compromised Following Two Attacks On DeFi Protocol bZx. What appeared to be a serious blow for Decentralized Finance, the DeFi lending protocol, bZx was compromised. A perpetrator managed to pull off two successful attacks and got away with almost $1 million worth of ETH.

IOTA Releases Safe Version of Trinity Desktop But Mainnet Remains Suspended. IOTA continues to investigate and examine the flaws in its native desktop wallet, which led to multiple thefts of funds of its users. The team released a safe version of its Trinity Desktop Wallet, but its mainnet continues to be suspended.

This week we have a chart analysis of Bitcoin, Ethereum, Ripple, Tezos, and Binance Coin – click here for the full price analysis.